A Robot with Conscience 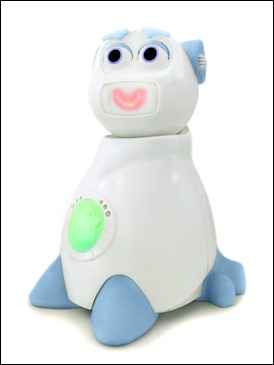 Spain has designed the world’s first robot with its own “conscience” and “life”, which will “entertain, teach and be a companion” to humans who purchase it. The AISoy 1 is the first social android developed by Spanish firm AISoy Robotics, which is now bringing its creation out of the laboratory.

Diego Garcia, one of the “fathers” of the robot and head of AISoy’s product engineering and development division, said that AISoy 1 was conceived to entertain and provide company to the user, but its main objective is to live, just like any other being that senses, has emotions and makes decisions.

At 25 cm in height and weighing 1.5 kg, the robot is almost a living being. It has the same activity as a living being, it has its own autonomy and conscience. It also has a series of basic needs, like nourishment and security, and other more advanced ones, like love, recognition, freedom and, above all, enjoying itself and getting along well.

In contrast to the available robots developed till date, its makeup does not consist of a collection of limited actions or programmed responses. It’s dynamic, it has its own life and, at times, it’s unpredictable, according to the team od designers at AISoy.

The robot is capable of learning from experience and modifying its behavior, values and actions it can undertake at specific times. In fact, they even assert that if one takes two AISoy 1’s and leave them in two different families, within two months they will be totally different because they will have had different experiences

Any family will be able to buy the robot, which is in the final phases of production, and it will be sold via the AISoy 1 website. Although the price of the domestic robot has not yet been made public, the firm says that it will be “less costly” than alternative prototypes developed by other firms.