The recursive backtracker algorithm we discussed in the previous article can be easily improvised and implemented for grid mapping. This can be understood by understanding that the algorithm is essentially a search algorithm designed to locate the destination point anywhere on a grid with obstacles and thus it will check every point on the grid. So if the bot is given only the starting point, it will go to all points on the grid and return back to the start and when that happens we can program it to stop. Now we know if we have stored all the points that the bot has visited, these will indicate open positions on the grid and the remaining points will become the points containing obstacles (in this case platforms that provide the path for the upper bot).

Shortest Path Algorithm: There are quite a few algorithms that can be used to find the shortest paths in a maze or a grid. The common thing among them all is that a map of the grid is required beforehand. One such popular algorithm is the Dijkstra’s Algorithm. The algorithm basically finds the shortest number of steps between each node of the grid and the starting point.

The following function runs several passes through the given map and stores the shortest distance of each node from the starting point. 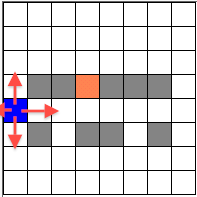 **Runs of the Pathfinder loop through the map look something like this : ** 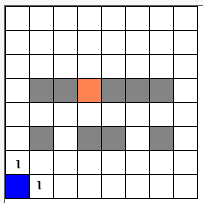 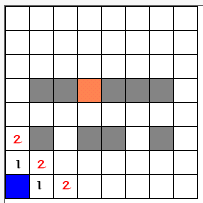 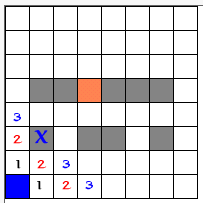 Marking the path from start to finish requires another function :

Now this function marks the shortest path, starting from the ending point, it locates those surrounding nodes which require the least number of steps to reach from the starting point. The loop ends when the code reaches the square which contains the starting point.

**Resources: **This tutorial has been compiled using the following resources: http://www.dotnetperls.com/pathfinding

In the link you can find a software written in C# that demonstrates the algorithm as well. You can also go through articles and videos on the Internet regarding Dijkstra’s Algorithm.