DIY : Build your own Lumos Bot

Build one or more autonomous robot(s) that can differentiate between number of light sources of similar intensity kept inside an isolated room (Arena) and turn each one off.

For this DIY, let us divide the discussion into 3 parts. The locomotion, sensors and processing.

_**_The locomotion system we are using here is the differential drive. It is a basic design with two motors, two wheels and a castor wheel. The chassis is a ready-made steel chassis that can be bought of the internet. 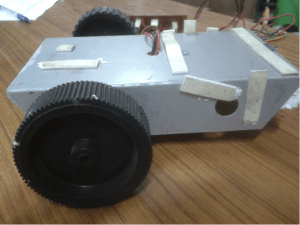 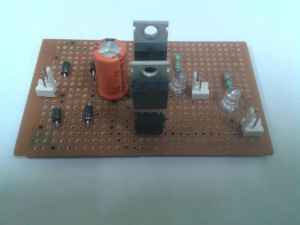 _**_This is the most important part of the robot. We have used here a three sensor layout which enables the robot to sense any light source in front of it. Of course, there can be several more different layouts to optimize the performance of the robot. Below is the picture of the sensory circuit mounted on the robot.

[caption id=”attachment_455” align=”aligncenter” width=”300” caption=”Fig: Sensor circuit and its placement on the chassis”] 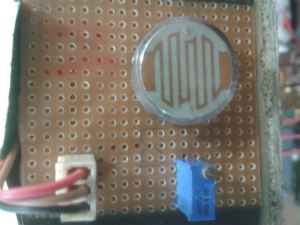 [caption id=”attachment_454” align=”aligncenter” width=”300” caption=”Fig: Sensor circuit and its placement on the chassis”] 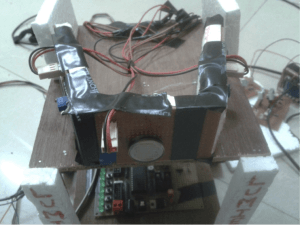 Let us mark these sensors as left(L), right(R) and centre(C) sensors. The ultimate goal of our code is to find which sensor receives maximum intensity and to face the robot in that direction. Below diagram shows the circuitry in the sensor circuits: 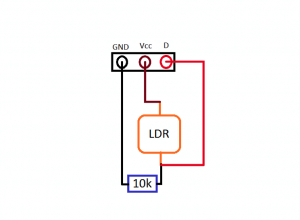 Each sensor has to be provided a 5V Vcc supply and a data(D) output has to be taken out from it. Three sensor circuits as shown in fig 2 will complete our sensory part of the robot.

[caption id=”attachment_450” align=”aligncenter” width=”300” caption=”Fig: Development Board for the microprocessor”] 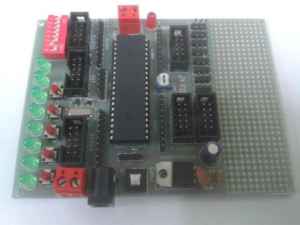 For the basics regarding the Atmega 16A microcontroller, refer to its datasheet which is available online.

So let’s get down to the connections. Here we have 3 sets of inputs coming from the 3 sensors. As these are analog signals, in order to process them, we need to provide this input to the Analog-to-Digital converter or the ADC. The ADC on the Atmega is located on the Port A. So the inputs from the sensors go to the first three pins of Port A( PA0, PA1, PA2, PA3). Now as the LED array on the development board is attached to the Port B, we will be using this port as the output from the microcontroller. From the microcontroller, the outputs have to go to the motor driver circuit which is used to run the motors. 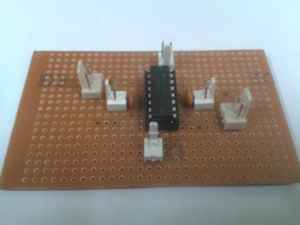 The voltage supply at Vs is used for running the 12V 100rpm motors while the 5V supply at Vss is used for powering the internal circuitry of the IC. Here one can easily see that according to these connections, the robot follows the following motions:

So now we get to the data processing. As mentioned earlier our aim is to identify which LDR gets the maximum intensity of light. As the intensity increases the resistance decreases. From the circuit diagram of our sensor circuit it can be seen that as the light intensity increases(Resistance decreases) the voltage given at the D terminal will increase with respect to the ground. Once you understand the previous line it is easy to figure out that the LDR having maximum light falling on it will give an output D of maximum voltage with respect to the ground.

So our algorithm for this should go as follows(L, R and C representing the various voltage outputs of the sensors):

The actual code to be burnt into the microcontroller is: