The morning of 29th September, 2019 saw groups of robotics enthusiasts streaming into V2, all eager to participate in the line following hackathon, and make their first foray into the realm of autonomous robotics. Armed with knowledge fresh from the KRAIG 201 session held the day before the 30- odd participating groups attempted to tackle the given problem statement: To create an autonomous robot that would successfully follow a black line on a white surface, from one end of the arena to the other.

The line following hackathon is hosted by the technology robotix society every year, after the KRAIG 201 workshop on autonomous robotics, to give freshers an opportunity to try out their hand at building their own robots.

The excitement began a day before the event. After the conclusion of KRAIG 201, participants rushed to buy components, form groups and try and make sense of all the knowledge they took in. Those who had taken part in robosoccer were busy taking apart their old bots and salvaging components, while others swarmed Choudhury’s and Bots ‘n Chips to get their stuff.

On the day of the event, V2 was all prepped up for hosting the hackathon. On the stage was an arena where participants could test out the bots, which essentially consisted of two IR sensors, motors, and two IC chips: a motor driver and a voltage regulator. Batteries and other basic materials were available, and the sub heads were all ready to assist the participants. The first half an hour of the event was smooth sailing, as components were put together, circuits were made, and bots were slowly taking shape. The hall was scattered with groups of 3 and 4, working earnestly on their respective bots. It was only after the basic circuits were made that the real excitement started. Seemingly perfect circuits were malfunctioning, motors were running in the wrong directions, the sensors weren’t picking up the right signals, or in other words the bots weren’t working. Then all hell broke loose. People were running around for components, solder irons, and other tools, frantically trying to get their bots running. The atmosphere was one of equal parts of panic, excitement, frustration and fun. 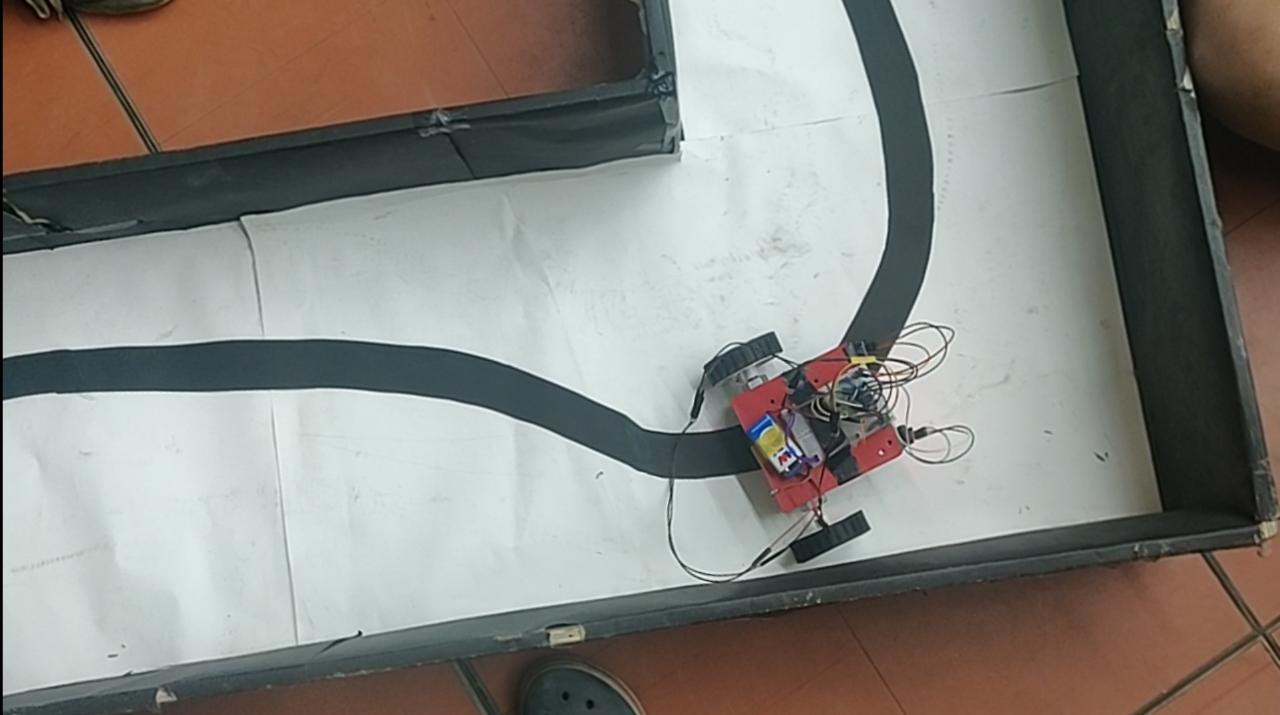 This was when the sub heads stepped in. They went from group to group, analysing and correcting circuits, debugging bots and restoring a sense of normalcy. Soon after, the first set of teams gathered up courage to approach the arena to test out their bots. Before running, the bot’s IR sensors had to be adjusted to the ambient light conditions, which too was a hurdle to overcome.

After an hour or so of debugging and testing, the arena saw the first successful run by the team: “The Robot Master”. A cheer went up, and the first years were thrilled by the sight of a robot autonomously navigating the course. The excitement was palpable, and the teams renewed their efforts, motivated now, by the prospect of success. Thereafter, more and more teams got their circuits right, and had the satisfaction of watching their bots follow the line successfully.

In hindsight, the line following hackathon was perhaps the most exciting and informative experience the freshers had at KGP. It sure had its ups and downs- the frantic rush to procure forgotten components, the frustration of debugging your bot over and over, only to discover a new error, the tedious cycle of testing and correcting, and finally the thrill of watching your robot follow the line from one end to the other….. they were all real experiences that contributed to a fun and satisfying learning experience. There were teams that got their bots up and running on the first try, and there were teams that spent hours on their bots, but what mattered the most at the end of the day, was that every single one of the participating teams got to taste the ultimate satisfaction of watching one’s own creation successfully complete the assigned task.

This was definitely an experience that left everyone thirsting for more, and was made so due to the efforts put in by the Technology Robotix Society.