Technology Robotix Society held a workshop-cum exhibition at the Ranchi Science Centre on 4th March, which was the first such event for Ranchi. In it, we were able to showcase the various domains that we are currently exploring in the field of robotics. The event was extensively publicised and covered by local newspapers, as well as mentioned in national ones like the Indian Express and the Hindustan Times, and it also received some airtime on local news channels. 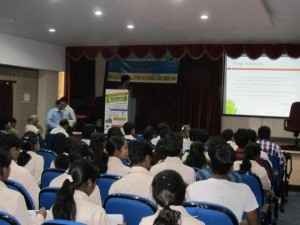 Autonomous robots were one of the most popular attractions for the eager audience. Some of the autonomous robots displayed were a line follower, a wall follower and a team of two robots that could communicate with each other and traverse on multiple heights.

Image processing, one of our niches, in which Kharagpur has shown brilliance over the years, was also demonstrated in the form of operating robots that could autonomously plan paths, and detect objects, colours and other visual features in an arena that simulated a maze with multiple bombs which needed to be diffused.

Mechanical robots were also there to inspire some of the more creative people in the audience. At the exhibition, the younger kids were given the liberty to play with small custom-made toy car robots (termed differential drives which form the basic chassis for more complicated modules). One of the more advanced contraptions was a manual robot that could move on a zipline and shoot balls into containers on the ground. Another interesting display was that of a robot that could balance an open container of water, and conserve as much of it as possible, while traversing over rough and irregular terrain.

For those who do not want to get into the nitty-gritty details of mechanical design, the use of robotics kits to make simple working robots was also displayed, for their benefit. There was also a theoretical session on an introduction to manual robotics and image processing for the attending students.

We hope that the interest among the attending students and the general public will encourage more people to take up robotics as a hobby and hopefully, as a subject of research. For us, this successful event was yet another reminder of how much potential there is for this field, and of our responsibility to cultivate it.